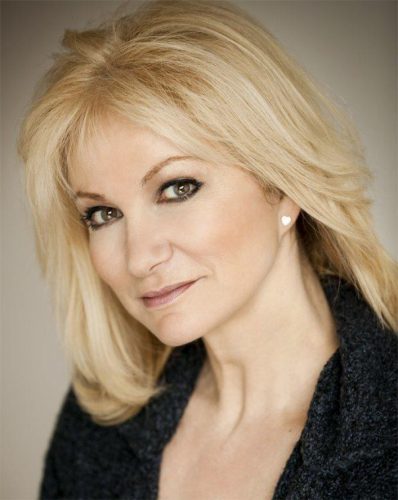 Debbie is an actress, an author, an altruist, a writer and a voice artist and has enjoyed a successful career in television and theatre. She is the only actress in the UK who has appeared in every major TV soap in the last 30 years as a regular character – she returned once again to ‘Coronation Street’ as yet another character – Carole Evans, landlady of the Weatherfield Arms, starting the cycle again.

She started her career in television as an impressionist in ‘Now Who Do You Do’ and went on to appear in the most iconic comedy and drama programmes of the 80’s, 90’s and 00’s! Ronnie Barker wrote a character especially for her in ‘The Two Ronnies’ – Voluptua Goodbody who was an amalgamation of all his fantasies! She’s appeared in everything from ‘Holby City’ to ‘Miss Marple’ – ‘Minder’ (both the series and the movie)to ‘Birds of a Feather’ and worked with artistes such as David Jason, Eric Sykes, Spike Milligan, John Cleese, June Whitfield, Tracy Ullman and most recently playing mum to Lee Ridley in the new Radio 4 series ‘Ability’ where she played a Geordie for the first tine in her career which is very odd as she comes from Sunderland!

Her theatrical record is even more impressive – she has done many national uk and worldwide tours appeared The Royal Court, the National Theatre. Her most notable West End appearance was at the Haymarket Theatre – starring opposite Omar Sharif in ‘The Sleeping Prince’ which she received many awards and accolades. The show began at Chichester and toured the UK before coming into town.

She’s been a top voice over artiste for 30 years spearheading huge campaigns and had her own radio series on Soho Radio ‘Debbie Arnolds Soho Vibes’. for 18 months.
She has also been the face of Etam and Goldwell and has written her own beauty column for many top magazines such as OK and Hello and national newspapers – she also has written a book ‘The Power of Reinvention’ available on Amazon

Debbie is currently Ambassador of the National Bullying Helpline, The Retired Police Railway Dogs and Buses4homeless regularly contributing to both BBC and ITV news and current affairs items, including several appearances on ITV’s This Morning and the Alex Salmond Show. As well as a distinguished TV, stage and voice over career Debbie is also the producer of Soap at Sea for Saga Cruises.

And now Debbie brings her experiences to GloTime.tv