Delighted to be celebrating their own 60th Anniversary milestone this year, Corgi are joining in the official Queen’s 90th celebrations with the launch of two limited edition, die-cast commemorative models, featuring the iconic Austin Mini and London Routemaster bus (RRP 9.99 each). Both models incorporate the Union flag in gold, on a purple background inspired by the official celebration colours. 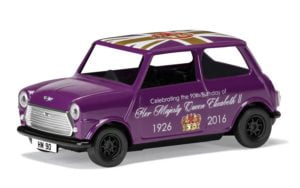 This historic occasion was marked by a four day-long celebration in London in May, chronicling the Queen’s birth, through to World War II, her marriage, coronation and a reign of more than 60 years.

The iconic British brand, also celebrating a milestone this year as the company turns 60, has a long standing association with the Royal family and this association is one of the reasons the name Corgi was chosen. 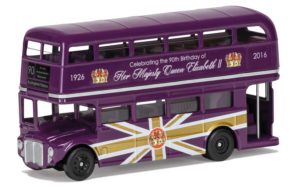 The Corgi brand was created by the Mettoy Company of Northampton which first started to produce colourful, pressed metal toys in the 1930s. The name Corgi (after the Welsh dog) was chosen for three reasons: first, because it was short and catchy; secondly because the models were to be produced in Swansea and thirdly because of its strong association with the Royal Family.

The first Corgi models appeared in 1956 and covered British-built saloon cars of the period. Names redolent with nostalgia including the Ford Consul, Austin Cambridge, Morris Cowley, Riley Pathfinder, Vauxhall Velox, Rover 90 and Hillman Husky were among the first to be produced. Each model sold for 3/- (15p).

Always at the forefront and to ensure a point of difference from other die-cast vehicles, Corgis were sold as the ones with windows. Other later innovations included Glidamatic spring suspension, opening bonnets and boots and diamond jewelled headlights.

Corgi’s best known model is James Bond’s Aston Martin DB5. First produced in 1965 and featuring ejector seat and front-mounted machine guns, it was an instant success earning the UK Toy of the Year Award that same year. Priced at around 10/- (50p), by 1968 more than 3.9 million had been sold. At an auction, a rare gold-plated version given only to visiting VIPs to the Corgi factory made £1,300.

One of the top selling models of all time, reaching five million units, is the 1966 Batmobile. Other best sellers include the John Player Special Lotus Formula 1 racing car and the Ghia L 6.4 (which had a moulded Corgi dog lying on the rear parcel shelf).

In 60 years, Corgi has produced models of virtually every type of car, bus and truck. Some of the most sought-after model cars include the 1965 Monte Carlo Rally Mini Cooper S, the 1966 The Man from U.N.C.L.E’s ‘Thrushbuster’ Oldsmobile and the 1959-61 Ford Thunderbird Hardtop, pale green body.

Models in mint condition and complete with box, which originally sold for a few shillings are now fetching hundreds of pounds. Today, the majority of Corgi cars, trucks and buses are produced as once-only Limited Editions and are often sold out within weeks of release.