Handirest is a new innovation designed and developed by Adrian Houlder, who came up with the idea when observing that his wife and daughter had nowhere to rest their hands when applying their nail varnish. They say that the simplest of ideas are the most successful, and this is definitely the case with this product, which has already been featured in some of the top fashion and lifestyle magazines and TV channels throughout the UK.

The Handirest is an ingenious manicure product for professional and home use. It is simple, easy and helps you to achieve a more comfortable and controlled manicure by supporting your hand and keeping your fingers secure and steady. The specially formed recesses help to keep your fingers still and therefore avoid accidental smudging or mess. The foam cushion is perfect for intricate nail art, applying false nails, and nail polishing. Handirest can be used anywhere. The cushion’s design means that one pad fits both your left and right hands, and any hand size. 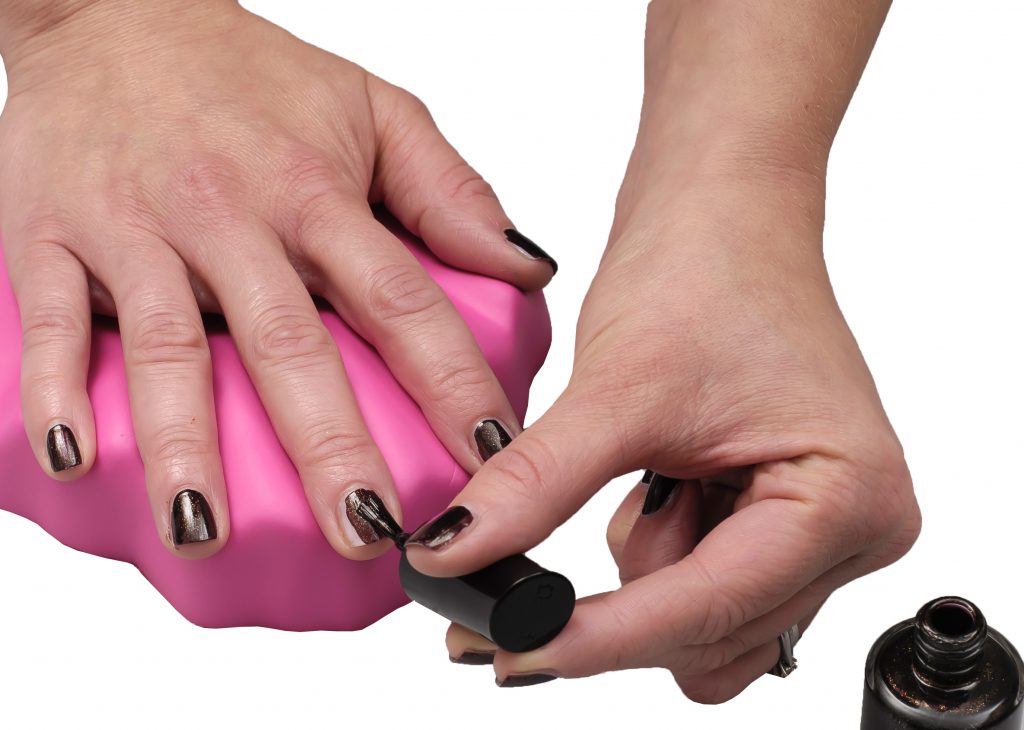 I met up with Adrian, who is still amazed by the overnight success of his invention, and he told us the incredible story of how it all came about.

‘The idea for Handirest began whilst I was watching TV with my family. An advert came on showing a woman painting her nails with her hand held up in the air. I asked my wife and daughter how they managed to paint their nails without their hands being supported? My wife said that she rested her hands on the table but found it uncomfortable. My daughter then suggested that I design something to overcome the problem.

The following day, I decided to find something soft, something to keep the fingers secure and something easy. I found some foam at work, I put my hand on it quite firmly and the foam wrapped around my fingers. I thought “this is exactly what is needed”. I then shaped a piece of foam with channels to support the fingers.

I took the piece of foam home and showed it to my daughter, who thought that there was probably a similar sort of device on the internet.   We went online and did a search, but we could not find anything that supported both hand and fingers.

At the time, I believed that was the end of it. I took what I had made back to work and left it in my reception area. To my surprise, the shaped foam started drawing a lot of attention, and became a talking point when customers were in the reception.

During one conversation, it was suggested that I should look into seeing if there was a market for the product, and also apply for a patent just in case something may come of it. I took my customer’s advice and came up with the name Handirest.

I began to research and speak to various nail technicians to come up with an improved version. After a few months, I had something ready to show. Shortly after completing the initial design, a customer came to collect some work that I had completed for a local radio station. The customer noticed the Handirest and we started talking about it as she just happened to be in charge of the beauty show which aired once a week. To my surprise she asked if she could feature Handirest on their show. 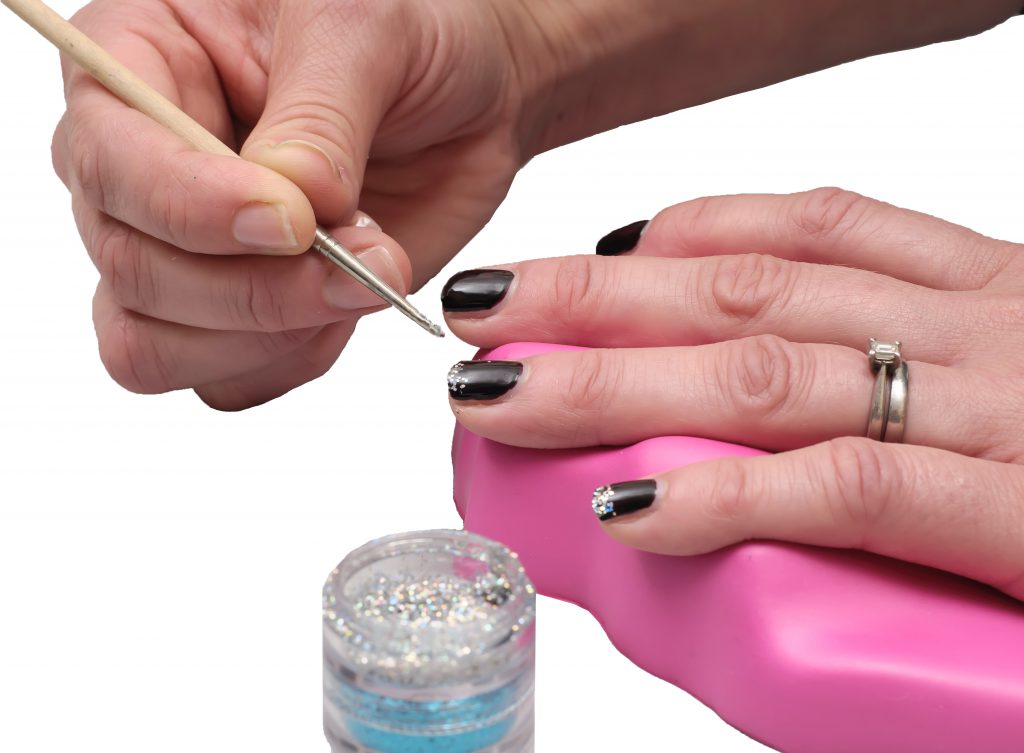 As my background is manufacturing, I knew very little about marketing and retail sales. I spoke to a marketing company who offered to help and suggested they start a facebook account to see if Handirest would draw any attention. On the launch of the Facebook account it went viral with ‘Likes’ appearing every few seconds. This excited everyone and now we had to see if it would sell. An Amazon account was opened at the end of 2012 and Handirest started to jump off the shelf.

I decided that I needed to look into getting a reliable supplier who could produce in volume if necessary, and as a result, this required some changes to the material to make it more durable and high quality product.

At the start of 2013 I had made some changes to Handirest and it was now suggested that I put it in front of the public by doing an exhibition. My marketing company signed me up to the Beauty UK NEC taking place in February. About a week before the Beauty UK, I received a call from a Amazon buyer who asked if they could buy direct from me. I was a little confused as I was only selling very small quantities on my account, but they informed me that they were alerted to Handirest sales, as the conversion rate was almost 100% every time someone landed on my page.

At the Beauty UK exhibition, I was selling a Handirest almost every minute throughout the two day event. I was also approached by Capital Hair and Beauty wholesalers. A member of the Scratch magazine team also took an interest in the Handirest. A few days later, I received a phone call from Scratch magazine, I was told, to my surprise, Handirest was now featured on the home page of their website, and that the other employees at Scratch magazine loved my product.

During the remainder of 2013, I continued to look for a manufacturer to produce Handirest. Eventually I found someone that I felt could produce larger volumes with compromising on the quality of my product.

I continued to make improvements to Handirest and began using a material that would be acetone resistant so that the Handirest could be easily kept clean and wouldn’t be damaged by the acetone found in nail care products.

I decided to take the new and improved Handirest to the Beauty UK 2014 exhibition. Handirest sold more than one every minute over the two days. The feedback from the trade and public was unbelievably encouraging.

During 2014, I started receiving calls from magazines asking to do advertorials on Handirest. Salon magazine, Scratch, Look. Mail On Sunday, At Home With Tess Daly to mention a few. One call was from Cosmopolitan who asked if they could put Handirest in their ‘Must Have’ section of the magazine and would allow me to use their logo endorsing Handirest as a ‘Must Have’. 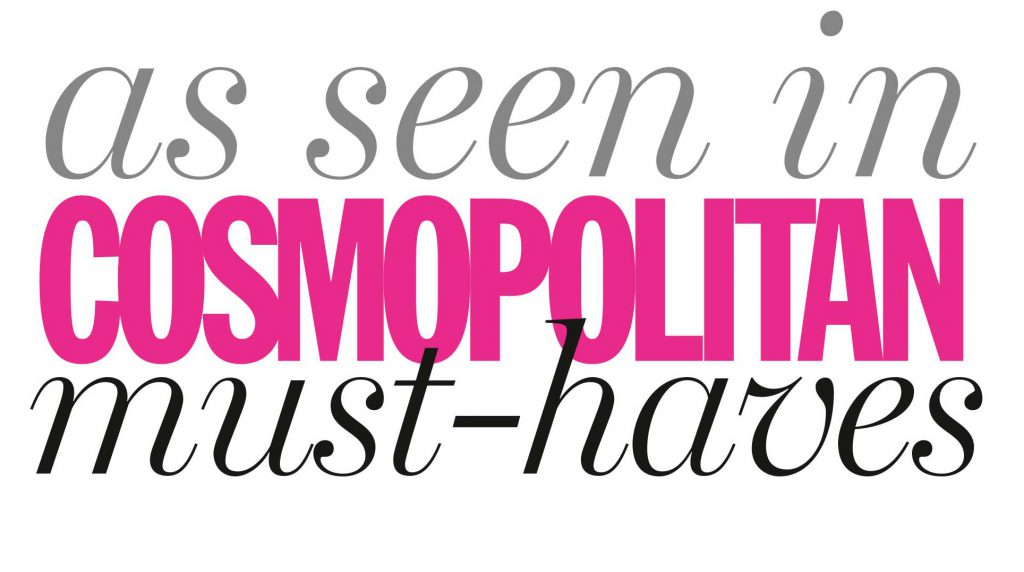 Towards the end of 2014, I decided I now had the perfect Handirest, and finished making any alterations. I also felt that I was now ready to market Handirest in a bigger way. I took Handirest to the Autumn Fair 2014 at the NEC, so that I could introduce Handirest to retail buyers. The exhibition was a great success.

Handirest is currently available in over 150 stores, including; Bentalls, Fenwick, Capital Hair and Beauty, Dennis Willams, Alan Howard, Pompadour, and other online stores.

QVC have also signed up Handirest to be shown on their shopping channel.

Every week, there is new interest in Handirest, and I am extremely pleased to also have Handirest endorsed by Sylvia Anderson, creator of Thunderbirds and Lady Penelope, and we are now working with Breast Cancer Care with special edition PINK FAB Handirest.

To be in with a chance to win one of five Handirests, just fill in the form below