More than 24 years after the first appearance of the outrageous champagne swilling, name dropping, over indulgent duo, Patsy and Edina are back and it is no surprise that they are growing old disgracefully. Well would we have it any other way?

I had the privilege of working with Joanna Lumley last year, and absolutely adored her. She is everything you would imagine, and I don’t mean in the Patsy sense, except for the fact that she is indeed absolutely fabulous. She is extraordinarily stunning and unassuming, and very approachable which is extremely humbling in the usual world of uppity ‘A’ list celebrity. She is also walking proof that life really does begin at 70 so most of us have a way to go! 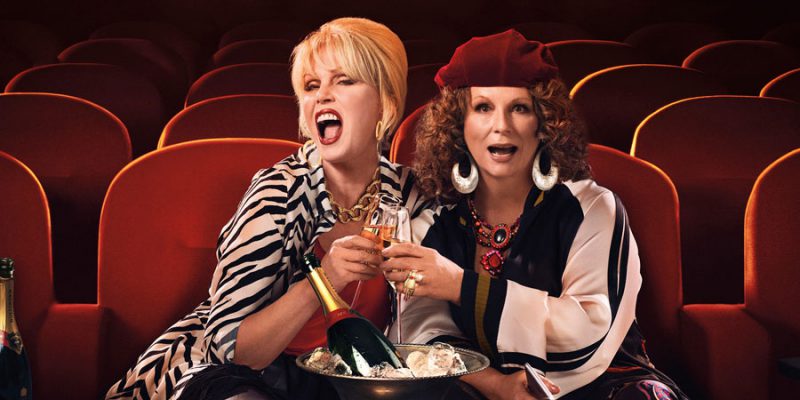 The film lives up to its name and without giving away too much contains all the best moments of the iconic series, and much much more including the killing of Kate Moss.

Kate is another legendary lady who is famous for her lack of verbal interaction, but who will shock you all with her surprisingly good acting skills.   It amazed me to know that she had taken on the role, let alone her skilful on screen delivery, but it was the iconic pair of Jennifer and Joanna who no doubt tipped the balance and persuaded Kate to accept the part. A decision she should be proud of.

Another hilarious scene features Stella McCartney as Patsy who irreverently refers to a moment with her father Sir Paul that had occurred back in 1969, to the absolute abhorrence of his daughter! Patsy as always remains undeterred and unembarrassed!

Other fun moments include Dawn French, Lulu and Emma Bunton to name but a few.

So before I reveal the entire plot and give away all of the best moments of the movie, I would urge you all to go and soak up the best piece of escapism around – it is a film well worth the wait, and it really is absolutely fabulous sweetie.

The Absolutely Fabulous Movie opens across the UK from 1st July
check your local cinema for dates & times
meanwhile, check out the film trailer below.