PRAVDA HA HA – True Travels to the End of Europe

Published by Bloomsbury in hardback and as an audio book on 1st November 2019
An important and unsettling exposé of Putin’s Russia, European disintegration and Britain’s future
from the acclaimed  travel writer and historian, Rory MacLean. 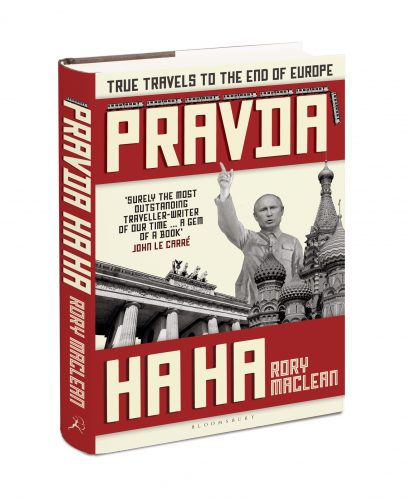 Pravda Ha Ha asks the question what has happened to the optimism of 1989 and, in the shadow of Brexit, chronicles the collapse of the European dream.

In 1989, the year when the Berlin Wall fell, 11 countries had border walls or fences.
Thirty years on, there are more than 70 around the world.

November 9th 2019 marks the 30th anniversary of the fall of the Berlin Wall.

‘No one writes quite like Rory MacLean’ – Robert Macfarlane

“A gem of a book, informative, companionable, sometimes funny, and wholly original. MacLean must surely be the outstanding, and most indefatigable, traveller-writer of our time.” – John le Carré

Available now to pre-order from Amazon

Book Synopsis:
In 1989 the Berlin Wall fell. In that euphoric year Rory MacLean travelled from Berlin to Moscow, exploring the forgotten half of Europe. “Stalin’s Nose”, his book about the journey, became a UK Top Ten and has never been out of print.  Thirty years on MacLean retraces his original journey, backwards, travelling from revanchist Russia through Ukraine’s bloodlands, to illiberal Hungary, Poland, Germany and the UK, across countries confronting old ghosts and new fears. Along the way he shoulders an AK 47 to go hunting with Moscow’s Chicken Tsar, plays video games with a St Petersburg cyber-hacker who cracked the US election, drops by the Che Guevara High School of Political Leadership in an unrecognised Nowhereland and meets the Warsaw doctor who tried to stop a march of 70,000 nationalists.  As Europe sleepwalks into a perilous new age, MacLean explores how opportunists – from Putin to Home Counties populists – have made a joke of truth and examines the veracity of historical narrative from reportage to fiction to fake news. He asks what happened to the optimism of 1989 and, in the shadow of Brexit, chronicles the collapse of the European dream.

Rory MacLean is one of Britain’s most expressive and adventurous non-fiction writers. His books – which have been translated into a dozen languages — include UK top tens “Stalin’s Nose” and “Under the Dragon” as well as “Berlin: Imagine a City”, “the most extraordinary work of history I’ve ever read” according to the Washington Post which named it a Book of the Year. He has won awards from the Canada Council and the Arts Council of England and was nominated for the International IMPAC Dublin Literary prize. According to the late John Fowles, Rory’s work “marvellously explain why literature still lives”.    In his humanitarian work, Rory has written about the missing civilians of the Yugoslav Wars for the International Committee of the Red Cross, on divided Cyprus for the UN’s Committee on Missing Persons and on North Korea for the British Council. In addition he has made over 50 BBC radio programmes. A Fellow of the Royal Society of Literature, he divides his time between London, Dorset and Berlin.

Book Background:
“Thirty years have passed since I made my original “Stalin’s Nose” journey from Moscow to Berlin, at the dawn of a new age. In 1989 Europeans embraced the idea of a borderless continent, believing that they had changed the world. Now in “Pravda Ha Ha” I’ve retraced my journey to try to understand what went wrong. Why – after liberating themselves from Soviet tyranny – have Russians surrendered their freedom for Dictatorship 2.0? How could so many in the West have fallen for the populists’ lies and spin, dragging democracy to this precarious moment? At the dawn of another new age, I have to find a way to keep faith in tolerance, empathy and the promise of the future, despite the rise of chauvinism and xenophobia, the echo of marching boots and the shadow of Brexit.”

True Travels to the End of Europe by Rory MacLean
Published by Bloomsbury in hardback and as an audio book on 1st November 2019
An important and unsettling exposé of Putin’s Russia, European disintegration and Britain’s future
from the acclaimed  travel writer and historian, Rory MacLean.