now for the very first time on DVD

Enjoy for the first time on DVD all five seasons of the Emmy and Golden Globe Award-winning TV classic in this Complete Series Collection.

Relive  every hilarious episodes of the classic sitcom that zeros in on a group of New Your City cab drivers. Lording over Alex (Judd Hirsh Independence Day) Bobby (Jeff Conway Grease), Elaine (Marilu Henner Evening Shade), Tony Danza), John (Randall Carver) and Latka (Andy Kaufman) is the one and only Louie De Palma (Danny DeVito Romancing The Stone, Batman Returns, Twins). The snide and surly taxi dispatcher, from the safety of his dispatcher’s cage, barks orders, hurls insults, and mercilessly berates the diverse and eccentric characters who drive for him. Along the way, they form a special bond, becoming friends and helping each other navigate the sometimes crazy road called life. 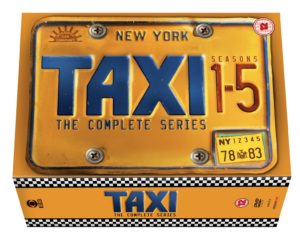