‘The Hunting Ground’ At The Oscars

This year The Oscars have been the centre of controversy – whether it be racism, age or gender issues – they have certainly evoked emotive dialogue and heated discussion.

A number of stars have even boycotted the event in protest against their claim of discrimination, which proffers the question of its relevance in the grand scheme of things.

But out of muck comes beauty, and an amazing tribute was performed by Lady Gaga surrounded by 50 survivors of abuse from College Campuses all over the US.

With a moving and rather astonishing introduction by Vice President Joe Biden, this music icon performed the strike point of the evening.

Lady Gaga herself has been a talking point of discussion over the years with her dress made of meat and ‘off the wall’ performances, but as she performed her song ‘The Hunting Ground’ we had to take her seriously. She shocked as always, but this time in a great way, she also moved us and performed with such heartfelt sincerity, that everyone at home or in house, was rocked to the core.

Gaga herself had been the victim of sexual abuse, and as she surrounded herself by other victims with writing on their arms like ‘NOT YOUR FAULT’ and ‘UNBREAKABLE’, we knew she was a fiery force of pure passion for all survivors including herself. 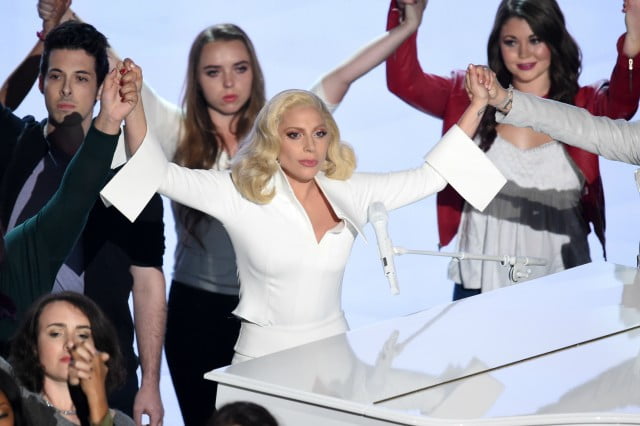 It was the first time that such a ground breaking gesture had been inaugurated at such an iconic event, but it really did go a long way to redeem itself and upstage the storm of its debate.

Performances like this make international events worthwhile, even if they arouse high emotions. Perhaps that is what they are for.

After all we have all been guilty, in spite of our devout political correctness, of occasionally questioning blame on certain victims of sexual abuse.

Wiping it quickly from our minds we make the right noises and say the appropriate sentences, but if you see the performance from Lady Gaga at the Oscars last night – you will never question again.