The Ray and Diana Harryhausen Foundation

When Ray Harryhausen died on the 7th May 2013 aged 92 it was time to assess his work, his legacy and of course his vast collection spread over several locations and countries. In the years since his passing The Foundation now has all the materials together for the very first time. Ray kept everything, a hoarder by today’s standards. After more than sixty years of film making, Ray’s collection comprises of more than 50,000 items. Ranging from sketches, finished artwork, armatures, tests footage, photos, negatives, books, bronze models, posters, studio memos, scripts, awards and all the creatures from his films. This the most complete and comprehensive fantasy cinema and animation collections anywhere in the world second only to the Walt Disney Company. Today there is a multimedia archive of film, tape and digital assets from commentary recordings I made with Ray about his films, to lost footage now found and scanned in 4k HD resolution.

Ray Harryhausen’s creatures and films are legendary. The posters for his films are evocative and as this books demonstrates, they are iconic images that have adorned both cinemas and bedroom walls for over half a century. Bringing them together for the first time in a single volume has been an enlightening experience. Many of the posters featured here are from our archive but many are also from collectors young and old from around the world. This has been a collaborative effort and one which has motivated the fan base. When Ray’s films hit cinemas from Mighty Joe Young in 1949 to Clash of the Titans in 1981, film posters had little or no monetary value. Most were simply discarded by cinemas or returned to distributors be recycled. Thanks to the diligence, loyalty and admiration of the cinema going public this book is a definitive account of posters for Ray Harryhausen’s films. Whilst we could not include every single variation we have captured the very essence of these films through their imagery.

The stories behind the collecting of the posters are unique. For me it was sending a hand-written letter to the manager of my local Odeon Cinema in Woolwich south London in 1981 that secured me a landscape quad of Clash of the Titans which is framed in my office today.

For those fans who are familiar with the artwork from cinema and home video releases there is plenty more to see. The evolution of the posters and the campaigns makes this a fascinating read.

Proceeds from the sale of this book will go to the Ray and Diana Harryhausen Foundation to help with the delicate and on-going restoration programme for the creature collection. Richard Holliss’ hard work has unearthed fascinating and rare items years after they had been forgotten or discarded.

We achieved this full picture of Ray’s film posters with the help and support of the fans and Richard Holliss tireless research. Some posters were issued for a short run or as a double feature so would have a limited print run and be much rarer. I am delighted that Richard has written this book. His long association and friendship with Ray Harryhausen makes him the ideal author of this definitive work. 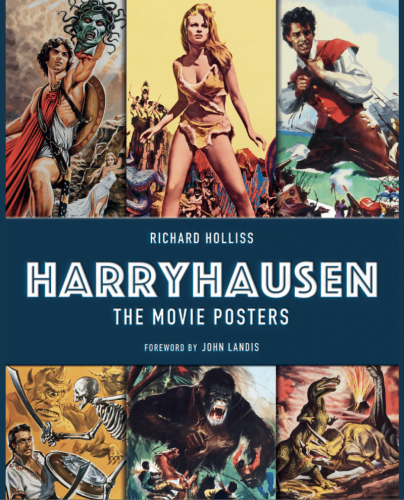