THE WEEK WE WENT TO NETHERGONG – IT’S A FAMILY AFFAIR

When my daughter and son-in-law suggested I join them for a camping holiday, with my three grandchildren, I did question my ability to survive such an ordeal.  I know my limitations and am up for a challenge in so many ways, but have always been more of a five star girl myself.

However, this was a special circumstance in that my eldest granddaughter of 7 was coming to the end of her treatment for a condition she had endured for some time, and was especially looking forward to carrying out activities like a normal kid again, that had been put on hold for the past two years.

So I readily agreed, and was instructed to look at a camping site, already familiar to the family called Nethergong Camping, in Kent. 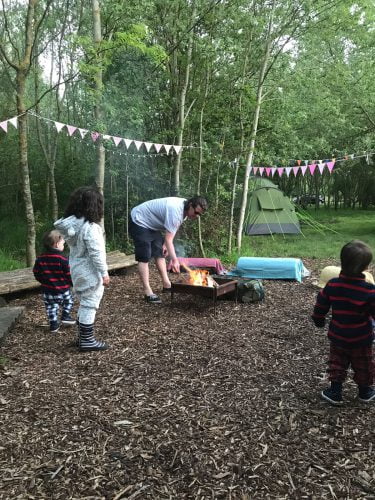 I decided to book a ‘Romany Caravan’ which looked cosy on the website, and covered my initial fears of insects and night time chills, and the rest of the family would pitch their well-equipped tent alongside to keep me company.  I also decided to bring along Milly my golden Labrador, who is approaching two and just loves long walks and lots of attention.

I drove down separately from the rest of the family, and on arrival spotted a very helpful young man on a tractor, who readily directed me to our camping location.  From his accent I realised that he was not a local, and he told me that he had come from the US after marrying his wife, who I gleaned was one of the ‘Nethergong’ family. 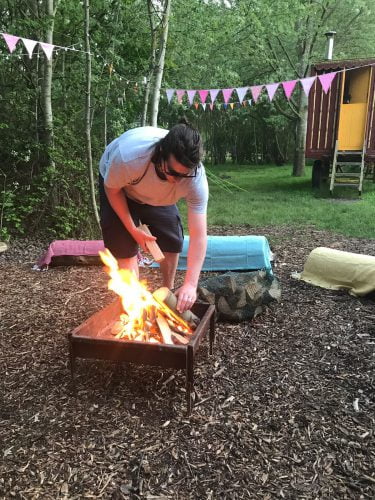 We were fortunate to catch the weather as it had warmed up and managed to swerve the floods that had besieged Kent the week before.

Our section of the camping site was next to a huge field, and so we were constantly on the go with the kids and the dog who insisted on clambering up and down the small but steep embankment so a work out was not needed, as this was sufficient for me to maintain my fitness regime.  It was also more than adequate to wear out the two-year-old twin boys who have more energy and are faster than Mo Farah on a good day!

The camp fire at night was particularly idyllic as Ray, my favourite (and only) son-in-law is great at building a fire and making a mean barbeque, and we shared stories and a few glasses of wine as the flames flickered in the darkness.

Some of the wildlife we saw too was unbelievable, with frogs in the fishing friendly pond which the kids adored, a resident swan family, rare dragonflies and damselflies, coots, moorhens and ducks of all varieties, newts, lizards and bats, rare vising Turtle Doves, Cuckoos and Nightingales you can hear at night, Owls and Marsh Harriers and Buzzards.

The facilities are particularly good, especially the showers which are powerful and refreshing, and the loos are maintained to a high standard of cleanliness.

I bumped into Jed, the owner, on one of my solo walks, who explained that the camping site had been in the family for over twenty-five years, and it was now run by his entire family.

He also offered to open their little shop and make us all hot drinks should we need good coffee or more provisions, and on discovering why we were there, sent his lovely daughter Hannah over to see if we needed anything extra.  She also has twin girls of 9 and so was completely au fait with all the basics of having young kids. 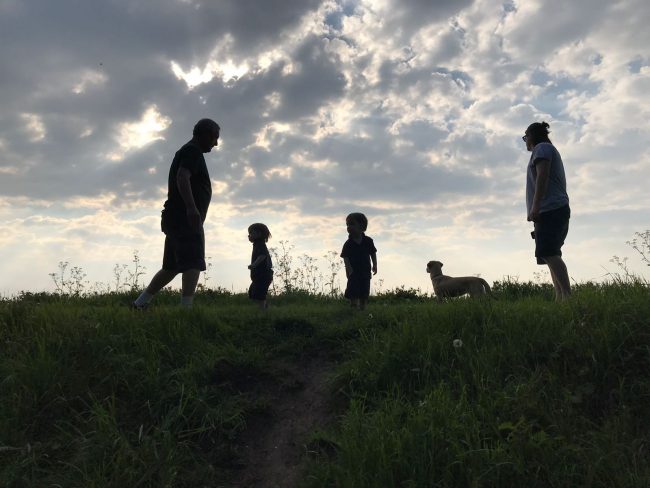 The children were all sad when the tent came down, and we packed up, but it is a place where we will return and make an annual family holiday for them all to remember. 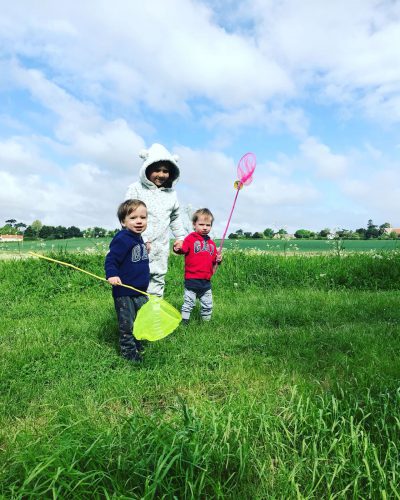 I personally am still not a complete camping convert, but have to admit to enjoying so many aspects of the few days at Nethergong, and for the record, would readily return, especially for the sake of the grandkids, wildlife and the barbeques, and having learnt a few invaluable camping tips on the way.