TWEEDING THE TREND – FOR STRENGTH AND STYLE

Tweed has always been a rather classic addition to our wardrobe, and always remains in mode, merely by its established stance in British fashion for both men and women.

We used to joke that tweed and brogues were a united front for the traditionalists and the upper-class hunting set, because of its durable nature, and so tweed has always carried the air of sophistication and conformity.

I remember my Mother taking me to John Lewis in the early 90s and ‘forcing’ me to try on a ‘sensible’ tweed coat, which she purchased with great pride.  I wore it reluctantly for several years, when it came into its own when I went to work in the creative sector several years later, as more of an early ‘vintage’ piece due to its style which had come back into fashion – again!

In recent years tweed has been sown into avant-garde jewellery, as part of high end designer costumes combined with traditionalism.  So it is already crossing generations and gender by its sheer determination to remain in situ in our wardrobe.

We can hardly say that tweed is making a comeback as it never really goes away, but it certainly has an eminence on the catwalk as we edge toward Winter.

Here are some great Tweed buys for Winter 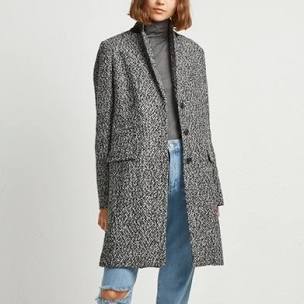 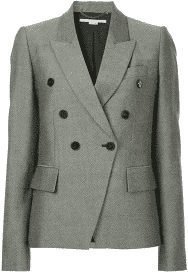 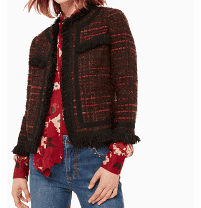