When in Rome, Do as the World Eater Does

Ah, Italy. Land of pizza, pasta, espresso and more. Such a wondrous country. And at the epicenter of it all, Rome. The Eternal City. What a glorious place to visit. It is indeed a magical land, transporting you back thousands of years no matter where you venture. I firmly believe that Rome is a place everyone should visit at least once in their lives. 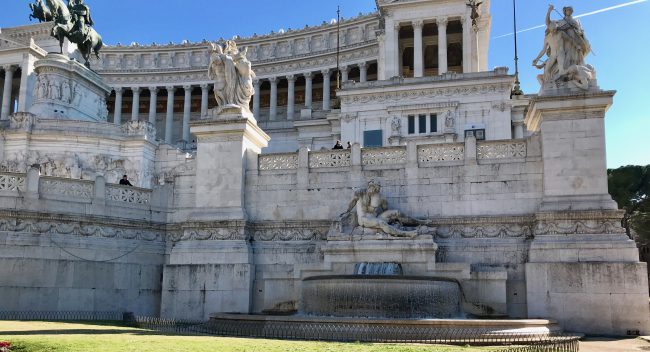 With all the history on display, visitors flock to Rome in droves, which makes it a tourist mecca… which means much of it is also a tourist trap. And nowhere is that more apparent than at it’s thousands of eating establishments, which all seem specifically designed to draw in sightseers and out-of-towners with the promise of a delicious, classic, Italian meal, but rarely deliver. Which brings up an interesting problem. Where should one eat? 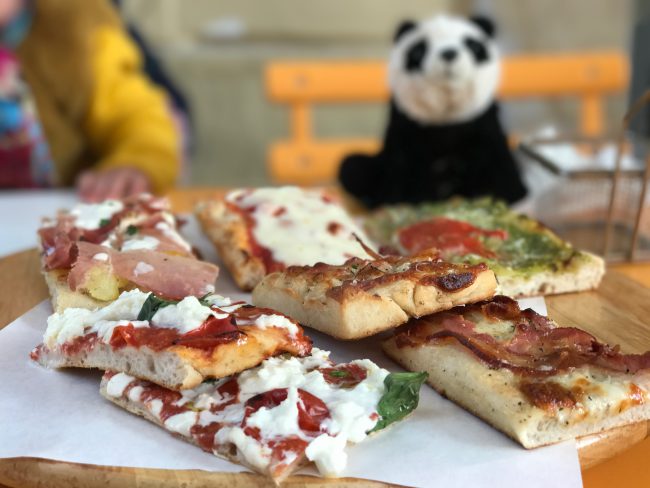 Romans love holding onto their classic culture – and history in general – more than other place I’ve ever visited. This is wonderful in regards to preserving culture, heritage, history, art… but tends to stymie progress in the food and coffee world. Let’s consider what the phrase “classic” means when it comes to a meal.

Many Roman restaurants claim recipes handed down from generation to generation. This may very well be true, and Grandma’s recipes might have included the best ingredients possible… when she was alive. Remember, there was once a time that food was, by default, natural, organic and whole, as opposed to pre-packaged, chemically processed, mass-produced, and littered with chemical pesticides, chemical additives and preservatives. Let’s assume that Grandma’s recipes really did hail from 200 years ago, as opposed to from the 1950s, when frozen, canned and microwave meals were standard in every kitchen, and it wasn’t yet known how bad these foods were for you. Going with a best case scenario, Grandma’s recipe might have called for tomatoes, which she grew in her garden, and chicken, which came from the family farm. This sounds great, but that easily could have evolved into a mass-produced, GMO, subpar-tasting, mealy tomato and a water-and-antibiotics-injected, washed-in-chlorine, mass-poultry-farm chicken. Technically, still the same ingredients, but eons away in terms of taste and health benefits. 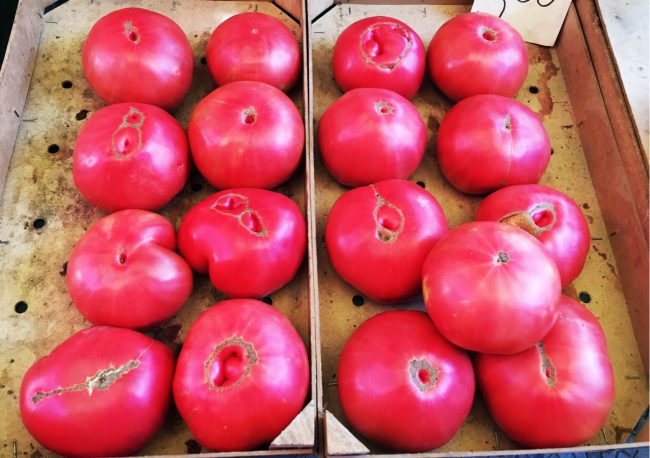 Bottom line is that, in today’s world of artificial foods, toxins, chemicals, additives, carcinogens, hormones, medicines and a whole other plethora of unappetizing ingredients added to our foods, sourcing good quality ingredients is the first step to a good restaurant. Unfortunately, I find that unless you’re paying a Michelin Star-level premium for your meal while in Italy, many Roman restaurants – even if they are sticking to the spirit of generational recipes – serve subpar quality ingredients, resulting in a subpar outcome, no matter how talented Grandma was.

Add to that, an alarming lack of consistency, some truly cranky service and crazily expensive food, it’s as if the Roman restaurant industry realized that since Rome is like Disneyland – non-stop tourists and no down season – they are unlikely to have a lot of repeat customers, so there’s no reason to worry about winning anyone over long term. And while I get how frustrating it can be to kowtow to ungrateful interlopers regularly, I don’t care! When I eat out, I want good food, good service, and – of course – a good price! 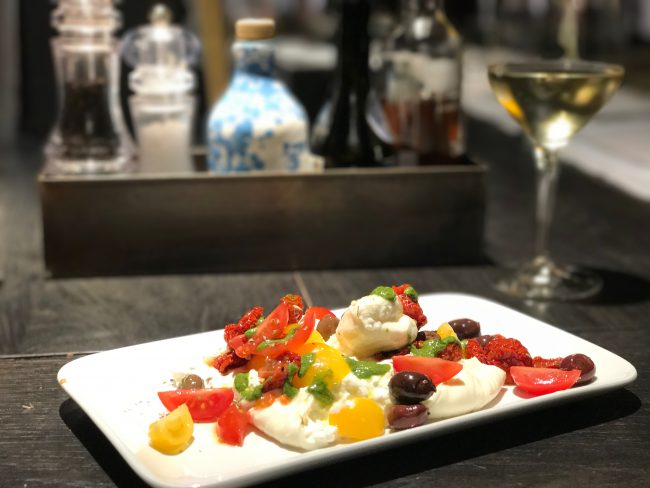 That’s why I was so happy when I finally discovered the best place to eat in Rome, which I ended up visiting numerous times: 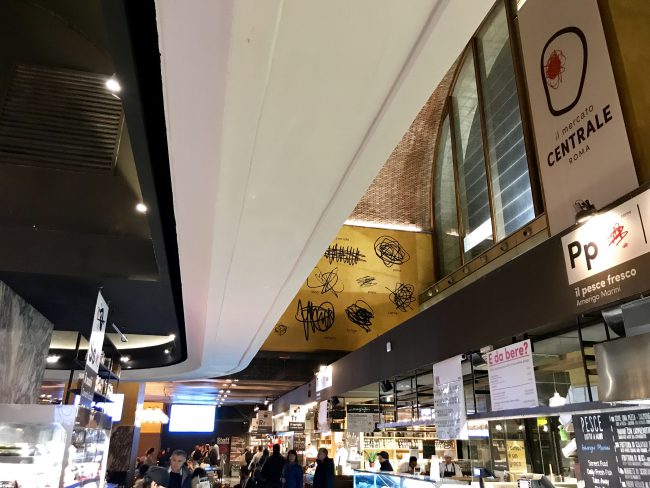 Thank goodness for you! Located in the Stazione Termini (Rome’s main train terminal), the market is home to a wide variety of high quality food vendors, a wine bar, a coffee shop and a restaurant. Fairly new, having opened in October 2016, the Mercato took over the Cappa Mazzoniana, a century-old hall built by architect Angiolo Mazzoni, initially intended for use as the station’s restaurant, which never happened (until now). The thing that sets the Mercato apart from the other eateries in Rome is that they went out and sourced the best of the best in terms of local chefs, so you don’t have to. They did the research and you reap the benefits. 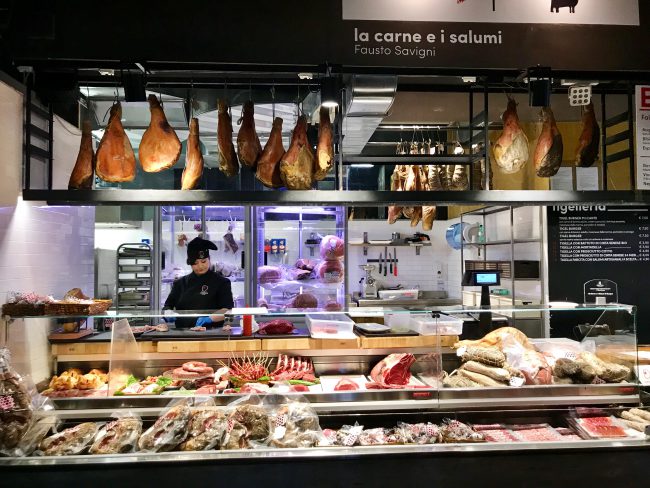 Whatever you might be in the mood for exists at the Mercato. Meat? Pizza? Gelato? You name it, you got it. They’ve got a pretty good system down, too. Sit at a communal table and a server takes your drink order. Then choose from one of the many stalls and eat to your heart’s content. Start with a glass of wine and an antipasti of cured meats and cheeses, move on to a pasta, have fish for a main, finish with a ristretto and something sweet. Each from a different vendor, specializing in a specific thing. 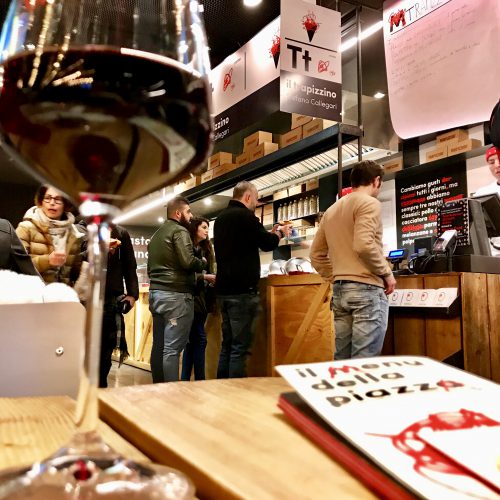 On this last trip to Rome, I frequented the Mercato a handful of times. I was over the moon about finding some enjoyable espresso there (something, surprisingly, very hard to come by in Rome), but it was the truffle stall (Il Tartufo di Luciano Savini, aka Savini Tartufi) that won my heart. We tried two different truffle pastas there, and they were, without a doubt, the best pastas we ate in Rome. 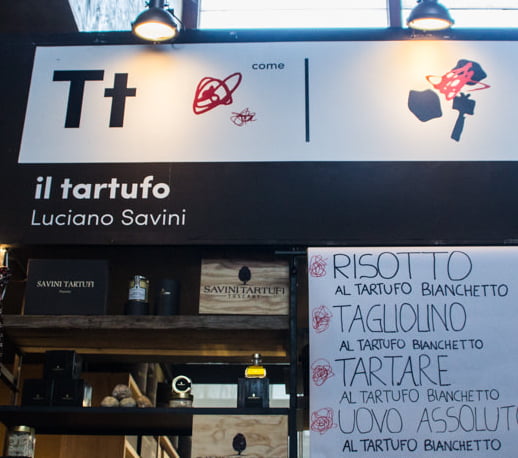 My favorite was the Gricia al Tartufo Nero. It starts with a calamaretti, which is a short, wide pasta tube, visually reminiscent of calamari, that collapses when cooked, trapping the sauce within (!). It’s coupled with bacon, a drop of milk, extra virgin olive oil and Pecorino Romano cheese, and then finished with a generous heaping of freshly grated black truffles. The sauce perfectly melds with the fresh pasta, and each bite is a reminder of all that is good in this world. I’d never had a pasta so delightful, perfectly cooked to the desired al dente consistency. Their Tagliolino al Tartufo was excellent as well, using a tagliatelle pasta in an egg/Pecorino Romano/extra virgin olive oil sauce. Both pastas were in the €15-20 range. That may seem expensive, but – to put Roman food prices into perspective – we went to a busy, casual osteria not at the market and ordered their truffle pasta. It didn’t even come close in taste or quality to the Mercato’s truffle stall, and it cost a hefty €37, nearly double the price. 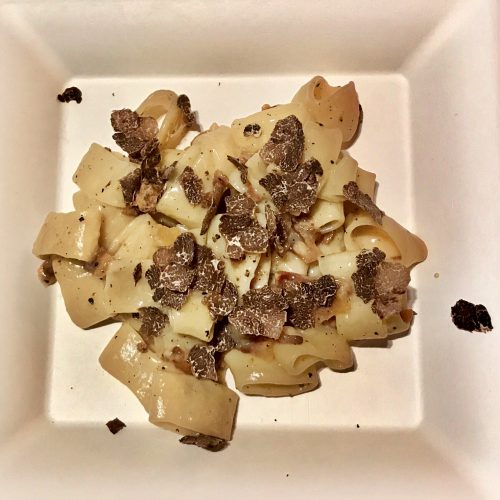 The next time we visited the Mercato, we had the Trapizzini, a triangular shaped pizza bianca (pizza dough) stuffed to the point of overflowing with traditional Roman fillings. They recommended as a first timer trying the braised beef (their #1 best-seller), but, not being in the mood for red meat, I opted for the pollo alla cacciatora. Wow. It was a winner. The chicken was juicy, flavorful and so well cooked that it fell apart easily. It was cooked in garlic and white wine, and mixed beautifully with the crispy-on-the-outside, soft-on-the-inside pizza dough surrounding it. My only regret is being too full to try another one. 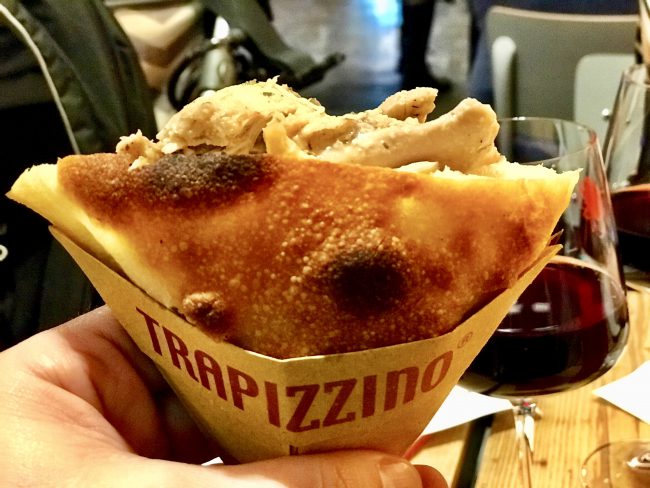 At the Mercato, you shouldn’t miss out on something sweet. I opted for a tiramisu from Cremilla. Even though they’re known for their gelato, I couldn’t resist the look of this fluffy, velvety, coffee-tinged dessert. Sure enough, it was smooth, subtle, creamy and exactly what eating a tiramisu in Italy should be like. 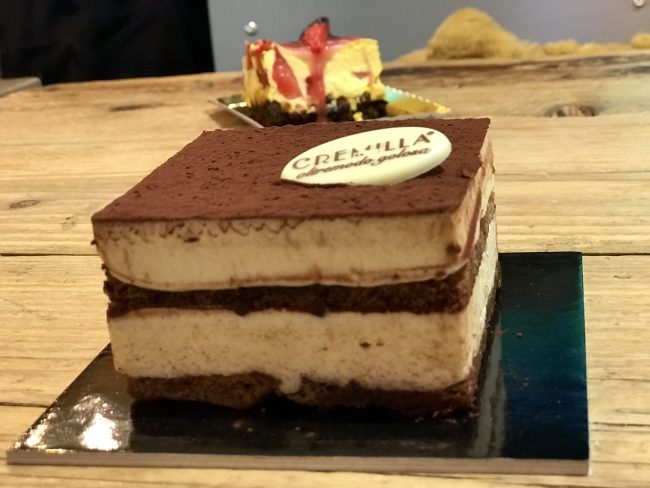 Paired with an espresso from La Caffeteria (one of the few espressos in Rome I didn’t have to cringe to ingest, nor add sugar to), my meal was complete. 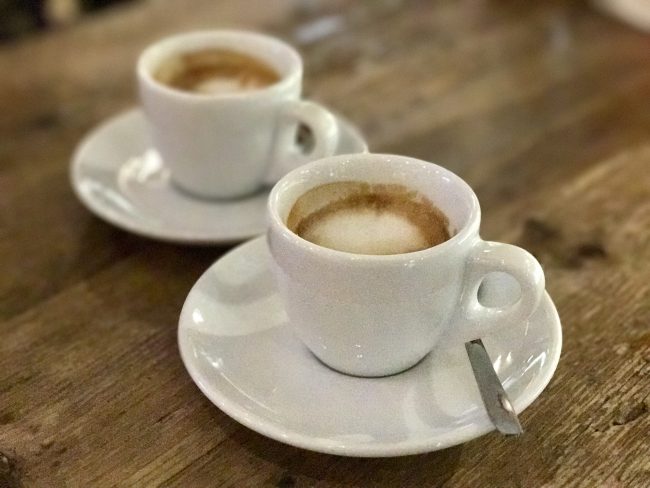 All in all, come to the Mercato to enjoy the hustle and bustle around you, and take in the smells of all the fantastic foods. Have a sit down meal at Michelin-starred chef Oliver Glowig’s restaurant on the second floor, enjoy a casual plate of lovely pasta at one of the many booths on the ground floor, or go really chill and simply grab a beer and a slice of pizza to go. Indulge in fried foods or sweets, chocolate and cakes. You can even buy some fresh produce on your way home. The market really does have it all, and they do an excellent job executing. 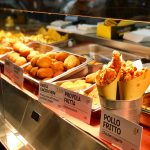 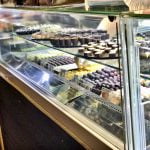 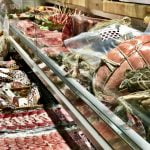 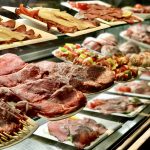 I tried a plethora of items and was pleased with them all. Mercato Centrale definitely offers a great choice for a variety of typical Roman foods (and more) at a good price. And you can trust the sourcing, because the vendors come highly curated. 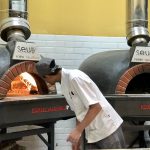 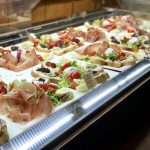 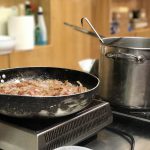 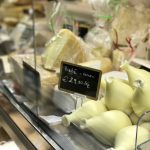 In other words, when in Rome, do as the World Eater does, and eat at the Mercato Centrale at Termini I. Buon appetito! 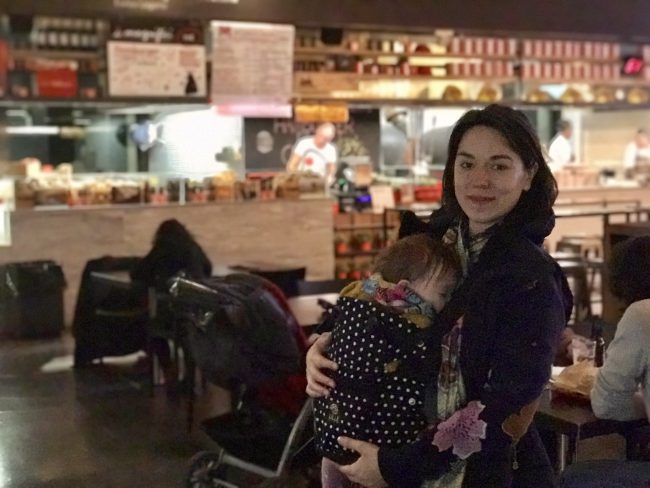