Why ‘mansplaining’ is not just reserved for Men?

We have heard a lot about men’s superior attack on women recently, whether in the work place or on the casting couch, but what about the recent reporting in the House of Commons where Theresa May called out Jeremy Corbyn for telling her the date of the imminent International Women’s Day.   Is this taking the issue of ‘manshaming’ a little bit too far?

I have personally been at the bitter end of sexism in the workplace, as a young actress years ago when propositioned by a well-known Film Director (who shall remain unnamed) when innocently auditioning for him in his office apartment in Kensington.  At the time as a naïve hopeful, who had my dreams squashed by his bullying behaviour, I had no option but to escape, literally by the fire exit, and consequently called my agent in floods of tears.

My Agent who was a key partner of one of the better known Managements, told me in no uncertain terms that I should have taken more care about being alone with him in his apartment, (how could I when this was the address I had been given), and to let the matter rest and keep quiet as the damage had already been done.  My damage I hasten to add, as she was in fear of her own reputation as I had made a complaint and stood up to a giant in the industry.  But that was back the nineties.

It is true I never auditioned for him again, nor did I want to but it was a lesson learnt, and I watched out of interest which actress did actually land the leading role in the movie.  This information will also remain confidential. 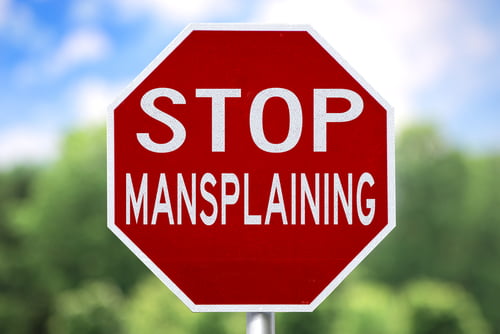 So, when I talk about ‘mansplaining’, I am coming from a place of empathy for women.  But in defence of the ‘unfairer’ sex, have had a lot of ‘mansplaining’ in my time from both males and females.

First those of you who do not know what the word means, and I am not about to act as the perpetrator.  But It is the act of a man explaining to a female who they feel is less intelligent or who needs information spelt out.

I think we have all been at the other end of this type of ‘put down’ as it certainly feels like that.  It has happened to acquaintances and friends a number of times.

A close friend recently told a group of us how he was talked down to by an employee who happens to be female, yes it can happen the other way round too.

My friend is a highly motivated entrepreneur, but is single and hopeless at the intricacies of technology and keeping house.  His PA who is a smart middle aged woman constantly ‘mansplain’s’ to him irrelevant information, forgetting that the person in question prefers to spend his time carrying out more urgent tasks, which is why the PA has been employed in the first place.

So where ‘mansplaining’ is concerned, it can happen in all walks of life and by both male and female.  So from now on I will call it ‘peoplesplaining’ and although it does not have such a delicious ring – it is certainly more honest – and may loosen the noose around our male counterparts necks for a while at least, and call a truce on the subject of ‘mansplaining’.