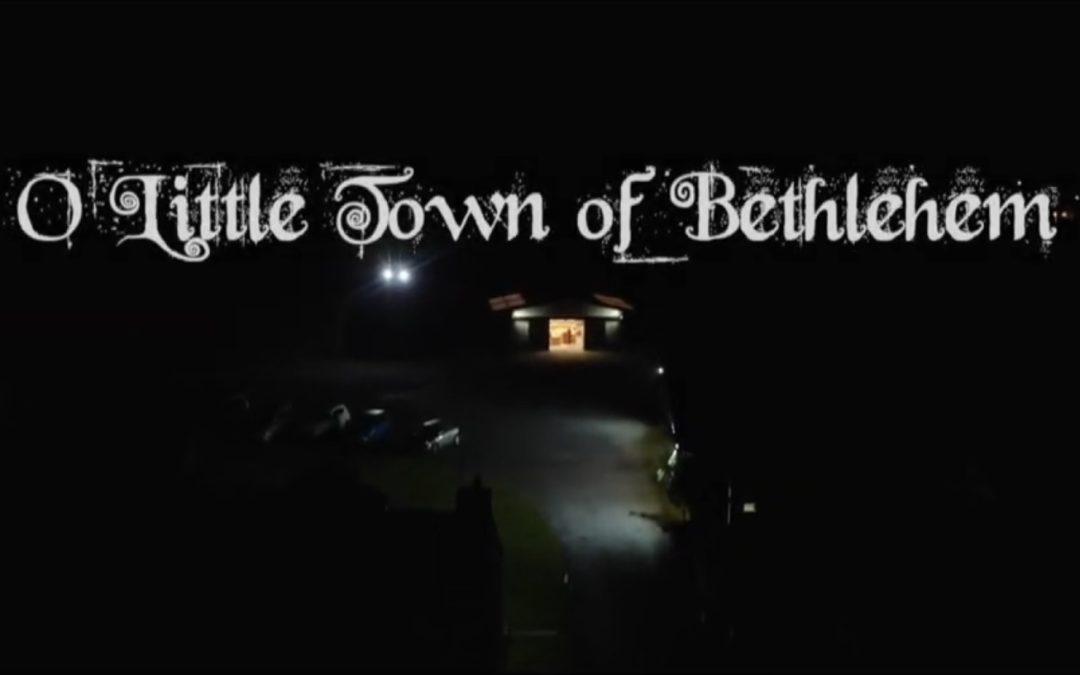 Carolyn Harris, MP for Swansea East, launches her annual ‘Everyone Deserves a Christmas’ campaign, which last year provided 3,800 Christmas food hampers right across the UK to those in most need. The hope is to surpass that total this Christmas.

For release to raise awareness for the campaign is a brand new single and also an accompanying celebrity supported video. The song, a fantastic modern version of the festive classic O Little Town of Bethlehem is sure to soon be ringing out across the country and the video must be seen to be believed! The lead vocalists on the track are Welsh singer/broadcaster Mal Pope and the West End superstar and singer/songwriter, Steve Balsamo. The video also features a star-studded cast of celebrities all relaying the central message ‘Everyone Deserves a Christmas’, including BAFTA winner Michael Sheen, Wales & Lions Rugby star James Hook, Carolyn Harris MP, Steve Balsamo, Davina McCall, Max Boyce, Bonnie Tyler, Premier League footballer Leon Britton, Sian Lloyd, rugby legend Shane Williams, Penny Lancaster, ex-rugby player and commentator Jonathan ‘Jiffy’ Davies, Swansea City manager Russell Martin and Catherine Zeta Jones!

‘Everyone Deserves a Christmas’ goes live with a video of their Christmas single ‘O Little Town of Bethlehem’. This reimagining of the classic Christmas Carol features a duet between, Mal Pope and Steve Balsamo, with support from Harry’s Youth Theatre Choir Swansea and the Morriston Salvation Army Band.

The single is taken from the album ‘Christmas with the Pope’ and is available to stream and download from all streaming sites including Spotify, iTunes and Amazon Music. The physical CD will be available from select shops or via mail order. Details www.malpope.com

As well as inviting everyone to download and stream the single, the video is available free of charge for use over the festive period and in return, donations to the Just Giving link below are appreciated.

Carolyn Harris MP and lead vocalists on the track, Mal Pope and Steve Balsamo are fully supporting the single release throughout December and are available for interviews.

Everyone Deserves a Christmas… With a Star-Studded List of Celebrities!

‘Everyone Deserves a Christmas’ Hamper Campaign

Carolyn Harris knows what it’s like to struggle to make ends meet.  When her 8-year-old son Martin was tragically killed in an accident she found herself mourning the loss of a child and with no way to afford to pay the funeral costs. At the time she was working as barmaid and it was her customers that rallied around to raise cash to help pay her debt.

Carolyn’s life took a dramatic turn when she walked into a Job Centre.  She was astounded to learn that the IQ test she had taken as part of a Government programme said she had the IQ of an Astronaut or Brain Surgeon.

After studying for a degree in Social History and Policy Carolyn found herself selected as the prospective Labour Candidate for Swansea East and she became an MP in 2015.

Carolyn has taken all these experiences in the House of Commons.  Working with the most unlikely collaborators from across the aisle she forced the Government to create a Children’s Funeral Fund, receiving a standing ovation from the whole of the House when it was passed into law.

More recently she secured a victory for her menopause support and services campaign with the government confirming a reduction in the cost of Hormone replacement therapy prescriptions.

But although she now regularly exchanges texts with Penny Lancaster and Davina McCall and occasionally lunches with the likes of Joan Collins, she is still rooted in her community running a Kids Lunch club through the summer holidays to the ‘Everyone Deserves a Christmas’ Hamper Campaign.

5 years ago, the Hamper Campaign was hatched on her kitchen table.  Last year with the help of Mecca Bingo, Carolyn had pulled together support from the community to raise funds to prepare over 1000 hampers in the Swansea area alone and 3,800 nationally. Even Gareth Bale donated a signed shirt and £15,000. This Christmas, Carolyn is hoping to surpass last year’s wonderful effort.

Carolyn approached her old school friend Mal Pope, to put together a Christmas Album.  She then called on long term supporters Michael Sheen and Steve Balsamo to join together to make a special Christmas video of ‘O Little Town of Bethlehem’.  The extended video includes appearances from Welsh legends, Max Boyce and Bonnie Tyler, assorted Rugby greats, some of her Menopause Campaign friends and even Hollywood Icon Catherine Zeta Jones.

Carolyn has a heart for her community and this beautiful video shows what can be achieved when people come together to help others less fortunate.

Mal Pope was born in Brynhyfryd, Swansea, Wales, into a family of teachers. He began learning to play the guitar aged seven and was soon writing songs.

In the early 1970s Pope sent a tape of songs to BBC Radio 1 presenter John Peel, who invited Pope to perform at the BBC. The session resulted in a recording contract with Elton John’s record label named The Rocket Record Company. Whilst studying at Christ’s College, Cambridge, he spent much of his holidays recording in London. After leaving Cambridge, Pope moved to London and signed to Harvey Goldsmith’s management company AMP.

In 1982 Pope started working for BBC Radio Wales in Cardiff as a researcher. He signed a record deal with Larry Page, wrote songs for Cliff Richard and The Hollies, duetted with Bonnie Tyler and Aled Jones, and toured with Art Garfunkel and Belinda Carlisle.

Pope presented the weekday early breakfast show on BBC Radio Wales, but the show was cancelled amid cuts by the station in 2019. Pope returned to hosting a daily show on the station in July 2020, presenting the late-night slot from 22:00-01:00, following the death of Chris Needs. Eleri Siôn took over the slot from 11 January 2021.

Pope hosted The Mal Pope Show, a late-night music chat show for HTV, in the 1990s, with the show winning a Welsh BAFTA award in 1995. He went on to host a late-night talk show on HTV called Heaven’s Sound, which won an award at the New York Film and Television Awards in 2001.

Steve Balsamo was born and raised in Swansea, UK, Steve started out singing in rock bands as a teenager before he came to the public’s attention in the mid ’90s taking the lead role in the West End production of Jesus Christ Superstar. A successful singer, songwriter and recording artist, Steve went to the same school as Mal Pope. They are good friends and have performed together before at gigs and on radio and TV shows. 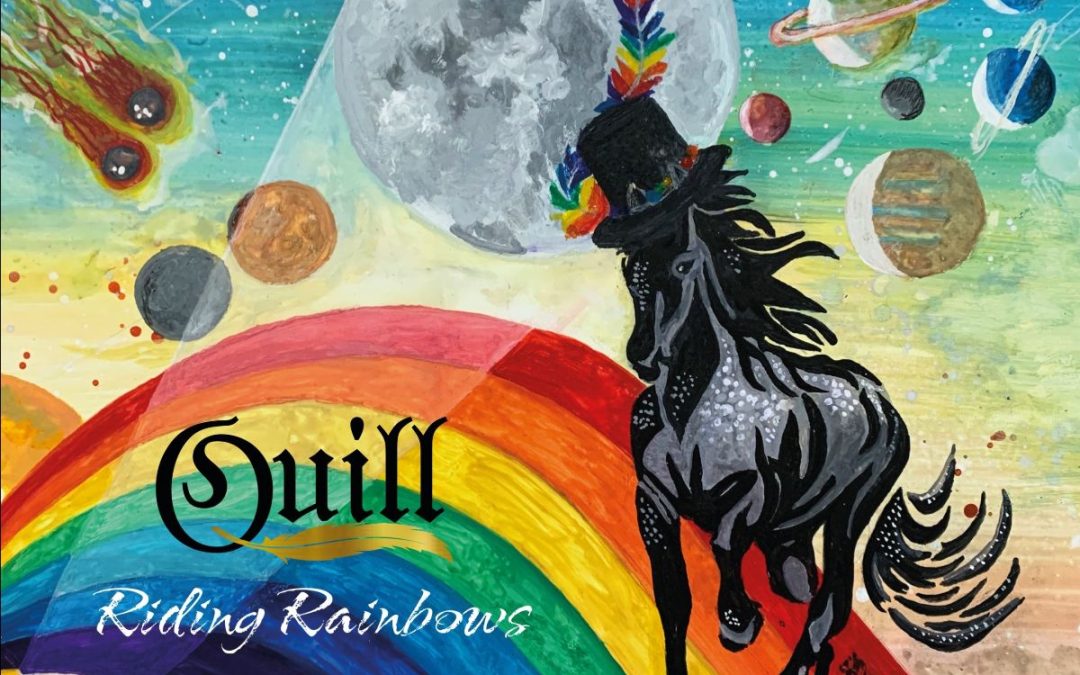 Quill, hail from Birmingham and feature the legendary drummer Bev Bevan. In 2017 Bev was inducted into The Rock ‘n’ Roll Hall of Fame, having notched up 50 million + album sales with a music career that spans 50+ years performing with likes ELO, The Move and Black Sabbath.

Whilst it’s been a quiet year for Jeff Lynne and Roy wood, the same cannot be said for Joy Strachan-Brain, Quill and Bev Bevan as they have used the time to meticulously prepare their latest studio album Riding Rainbows. So when The Move and ELO co-founder says that “this is the best album I have played on since ELO’s Out Of The Blue’ then fans and followers are being given good advice to check it out for themselves as they would doubtless be impressed with this 12-song opus by Quill with a little help from an inspired roster of guest contributors including Andy Fairweather Low, Nick Pentelow (Wizzard), John Lodge (The Moody Blues), Chris Norman (Smokie), Louis Clark Jr. (The Orchestra) and Richard Bailey (Magnum).

Riding Rainbows is an album reflective of Quill’s renowned energetic and polished lived performances with ten songs a collaborative effort between Bev, Joy and lead guitarist Lee Evans, and finds the septet in great form, whatever the choice of musical mood is. The sublime vocals of Joy Strachan-Brain demonstrate an amazing versatility and the articulate arrangements by Loui Clark Jr. are sure to please fans of the classic ELO sound.

Quill are a seven-piece outfit who blend rock, folk and Americana styles with a unique blend of drums, percussion, violin and vocal harmonies.

“Riding Rainbows” is a fine album worthy of chart implications and many a collection, excellently produced by Alan Caves. Truly a pleasure to listen to, review and recommend.” ????? 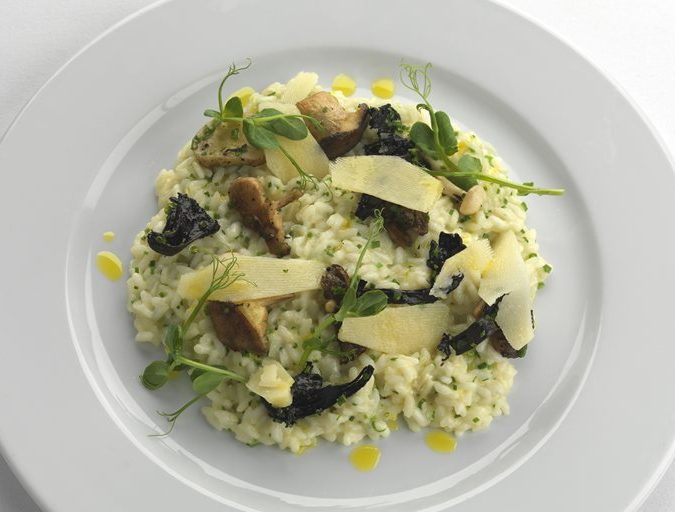 Mushroom and Pea Risotto with Parmigiano-Reggiano

This Risotto is a great family favourite I always cook for my wife and four girls.  Yes I am completely outnumbered – but this is such a winner and keeps me in their good books for at least a day.!!

Try it for your loved ones and make sure you add the Parmigiano-Reggiano cheese – it really enhances the flavour and makes it a bit special. 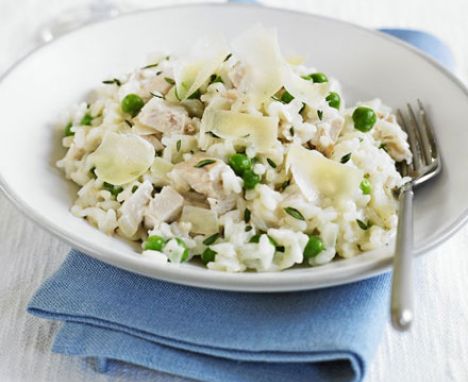 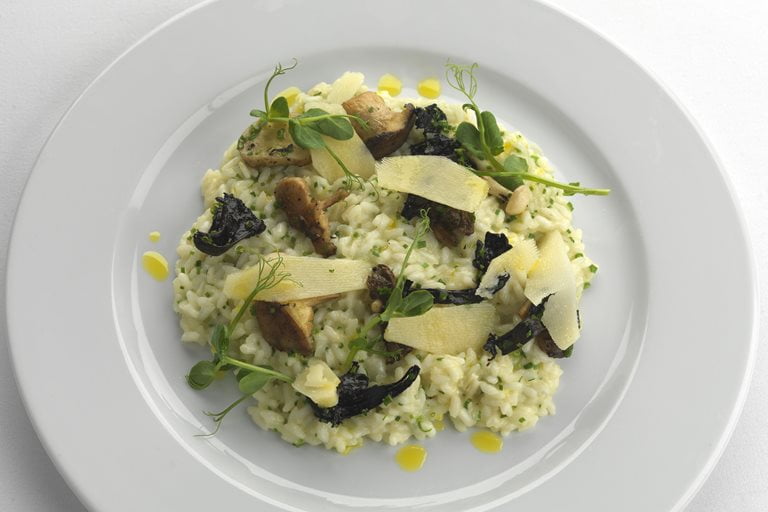 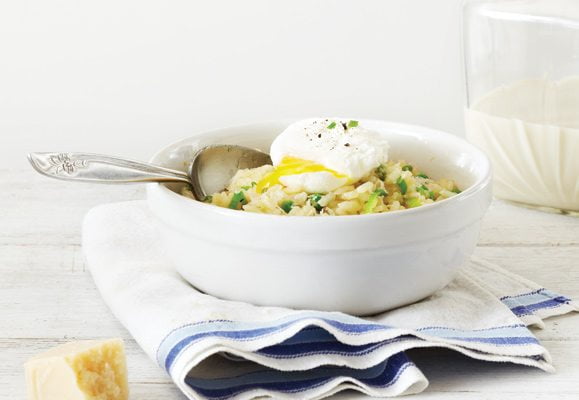