They Call it Puppy Love

So I have more news on Princess Milly my new golden Labrador puppy who is now eleven weeks old. All has gone really well, but of course any new animal has to be taught to work around your life, rather than theirs. But easier said than done! 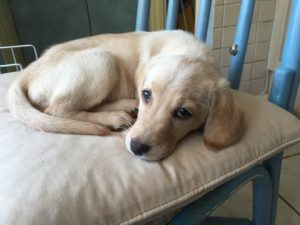 I was slightly over confident in declaring that I had managed to potty train her within a week as she suddenly decided that she had found a very convenient ‘bathroom’ under the arch of my kitchen/diner.

I persisted in lifting her outdoors and giving her a stern word of reprimand, and I was tempted to rub her nose in it as had been advised by an elderly relative, but when I tried this outmoded strategy, she just thought I was playing, and so decided not to pursue it.   But when the pattern continued for a few days – I visited my friendly contact at the local pet shop who recommended a spray to mute the smell that was encouraging her, as she had now decided that this was the place to go.

This worked I am pleased to report, although we have had a few more accidents since, but more out of excitement than bad behaviour.

I have also made a few more visits to Pets at Home, just to acquire some more toys to distract her from biting my feet or chewing inappropriate objects!

One that I would really recommend is a Kong, available from £4 from http://www.petsathome.com which is a hollow toy that you can fill with her favourite treats, and will keep them occupied for hours, especially if frozen overnight – also good when they are teething. Yes, a result, and one that lessened the guilt of putting her in her cage to enable me to work or eat. Otherwise It is can be as tiring as having a toddler!

Also, once you decide on what brand of food is best for your pocket and your pet, you could add to their diet some uncooked meat bones, which they will relish and will again keep them occupied for ages.

The other decision you have to make – are you going to allow your pet to sleep in your room or on your bed? This has to be your decision, and I have opted to put her cage by my bed so that she doesn’t feel lonely as I mentioned recently! Other friends have opted to allow their dogs to sleep on the bed, with their own blanket to create their own area.

My compromise has worked well, especially after the first couple of nights, a bit like leaving a baby to cry!! But it is slightly easier if you know that their initial ‘cries’ are just to get attention, if you have fed and watered them and they have had a recent bathroom break. So please heed my advice, and don’t give in as they will quickly adapt.

A friend recently acquired a puppy and couldn’t cope after three days and sent him back to the breeders, having decided that it was too much like hard work. I sympathise, but was slightly perplexed that he hadn’t done his homework before deciding to go ahead – as it is a major commitment, and one that you should take seriously.

The main thing to remember is, if you stick to your guns you will reap the benefit in a matter of weeks, and make pet ownership a pleasure rather than a chore, and having your new little friend by your side completely worthwhile. 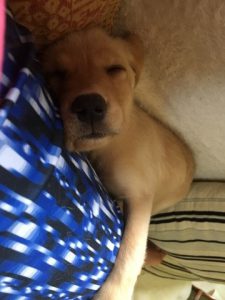