In the Name of the Father

As we are in the thick of the big decision of whether to stay in or get out and stand alone as a Nation, a rather disturbing piece of news has landed on our doorstep.

We have always been the first as a Country to boast of our forward thinking attitudes and promising advances toward equal gender parenting. But it may be a shock to discover that the UK are way down the chain with hands on Dads compared to the rest of Europe.

What does it mean to be a ‘new’ Dad? I asked a number of young parents, some of whom are stay at home Dads, juggling their parenting skills with running a business, or as their partner is the bread winner.

One young Dad told me ‘it was tough at first as I didn’t feel equipped to change nappies and give my son his night feed – I felt anxious and inadequate, but it was only time that has given me the confidence and liaising with other parents to know that I was doing well, as nobody teaches you to be a good parent’. I could have been having the same conversation with a new Mum, the content and sentiment are the same. As he and other hands on Dads admitted, there are no degrees or recognised courses in parenthood, and that goes for both men and women everywhere.

Another slightly older Dad admitted that at first when he and his partner decided to go for the shift of parenting, he was aware of his own judgemental attitude of the past with the ‘house husband’, but admitted that the rewards had been immense, and he was reaping the benefit with his two daughters being grounded and doing well at school because of his dedication as a Dad.

Another survey shows that kids with Dads who are involved with a child’s upbringing are more likely to produce offspring who do well in life and don’t falter when leaving school or uni.

It is also true that some Dads earn more money as there is still a gender imbalance regarding salaries (another topic!) and prefer to work, and that can come with some guilt, not being there at Sports Day or sometimes in the every day. But there is still time for involvement when home, and as long as the absence isn’t through lack of interest or engagement, the parenting skills can kick in at any time, are still very important.

A really interesting radio programme on LBC recently covered this very subject, and one caller was adamant that woman should remain in the home, bare foot in the kitchen and hands on with the kids. You could hear the frustration in the presenter’s voice as he responded in disbelief to the man’s rantings, which culminated in the caller saying that role reversal of this nature was unthinkable.

There are many families across the country who have opted for binary parenting or for the Dad to lead in the day to day running of the home and spending time with the kids. But we still have the dinosaurs who insist that nurturing of young ones should fall with the Mother. 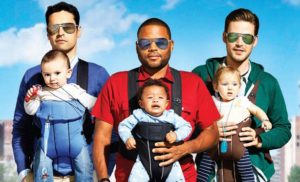 But as the same very amusing and intelligent presenter stated as he summed up his conversations – ‘Dinosaurs were great in their day, but eventually became extinct.’ In this case we really hope that to be the case.