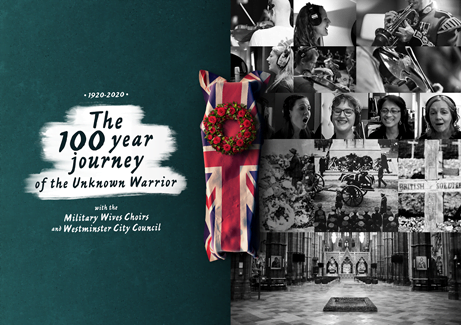 This November, a special collaboration between the Military Wives Choirs and Westminster City Council will commemorate the centenary of one the most poignant stories of World War One: the burial of the Unknown Warrior.

On 11th November there is a service hosted by DCMS / RBL and Westminster Abbey. It’s a recreation of the burial 100 years ago so will include Abide With Me being sung by the Abbey Choir. This is being  broadcast live on TV, though the usual Armistice Day commemorations at Whitehall are not happening this year due to COVID.

To commemorate the centenary of the journey, members of the Military Wives Choirs from across the country have recorded a new version of a song originally sung at the funeral 100 years ago.  ‘Abide with Me’ was one of two tracks that survived experimental recording at the ceremony to become the first electrical recording ever sold to the public.

The guests of honour at the ceremony one hundred years ago, over and above any Government and military officials, were a group of about one hundred women. They had been chosen because they had each lost their husband and all their sons to the war. “Every woman so bereft who applied for a place got it”.

It is therefore fitting that Military Wives Choirs were chosen to record this special 100th anniversary version of ‘Abide With Me’. With 73 choirs and more than 2000 members in British military bases across the UK and overseas, the Military Wives Choirs is a charity that brings all women in the military community, not just wives, closer together and empowers them through singing.

Conceived before the impact of COVID-19 had hit, and then created and recorded during lockdown, the production of the track became a journey in itself – showing the power of music to bring people together during difficult times. Conducted by Hilary Davan Wetton and produced by Sean Hargreaves, and featuring a trumpeter from the Band of the Scots Guards.

The Story of the Unknown Warrior

100 years ago, as the nameless soldier was laid to rest in Westminster Abbey, ‘Abide with Me’ rang out – and a nation came together. This special re-recording of the hymn aims to retell the story of the Unknown Warrior and, once again, unite a nation

Of the 1 million British and Commonwealth servicemen and women killed in World War One, some 165,000 would never receive a proper burial. Many were left in unmarked graves on the battlefields where they fell. Some were simply never found.

This tragic loss of life and the ongoing suffering of families with no place to mourn led to an idea. An idea that in 1920 saw one of the fallen – rank, regiment, service all unknown – returned from the battlefields of Europe and buried in Westminster Abbey with all the honour a war and  flu-ravaged country could muster.

Here is an emotive and powerful music video to accompany the song, which succinctly tells the story of the Unknown Warrior https://vimeo.com/467783793/bf31287250

There will also be a short documentary video about the story of the Unknown Warrior, told by members of the Military Wives Choirs available very shortly.

Here  is the music link and also a short video of footage shot 100 years ago…and today.

MILITARY WIVES CHOIRS – ‘ABIDE WITH ME’