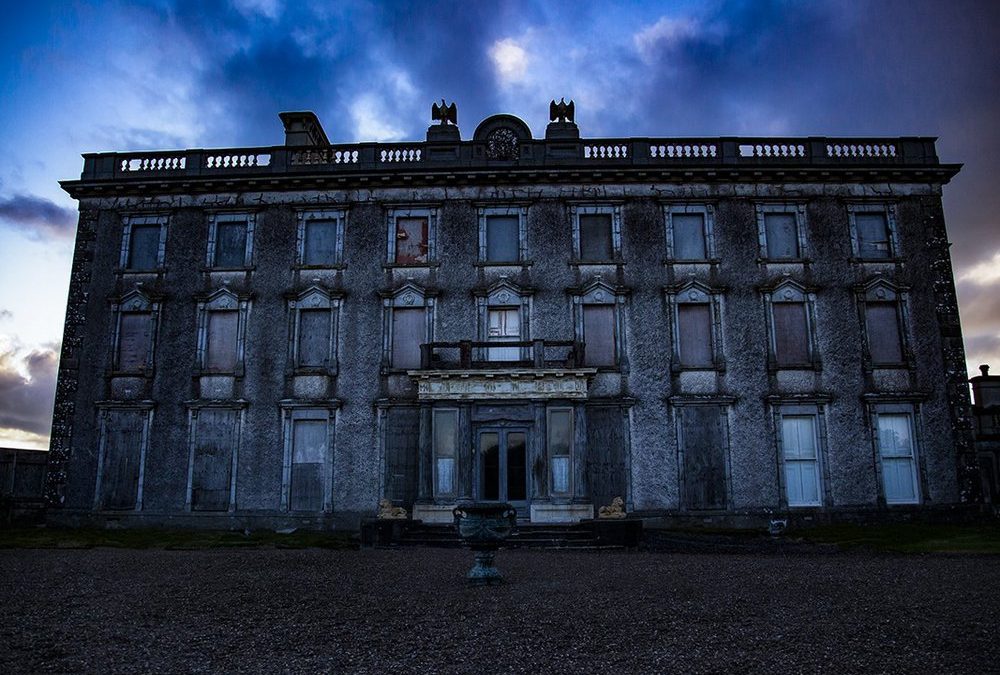 A Ghost Story by Alex Shewan

She felt the tightness within her chest as she approached the Tudor Hall which loomed in front of her, ominous and unwelcoming. Why had she come? It was against her better judgement. She always trusted her gut; her instinct had served her so well in the past. She had always had that gift, that perception. She knew not to go against her inner feelings but this time there was a more powerful force. Something malevolent. Yet she could not resist its calling.

The Hall had its own energy, a reminder of its tragedy. She shivered and pulled her coat tighter. She stopped and looked up. The Tudor building loomed over her; she could feel its sadness. She had an affinity with this building yet she could not explain why. She feared it. It had been thirty years since she had last been here but it had never let her go. It held on to her mind – the tragedy, the despair. The evil. She refused to let it in but it had haunted her for her entire life. A power too strong for her. A power which would not let her go. A power which first engulfed her as a child…

It was a beautiful day in spring – late April. The sun dominated the sky, the warmth encapsulated her. She was 10 years old and bewitched by the scene in front of her. The beautiful Tudor hall with its secrets and its terrifying past mesmerised her. She stood there, enraptured as she listened to the tales of the past. She felt at home here; an affinity as if this hall was a part of her soul, her being. She was transported back to the 1500s as she envisaged the inhabitants of the house. This was where she had to be. She felt it.

The group of chattering, exciting school children was eventually escorted to the imposing oak door and they were led into the impressive hallway. A hallway which took her breath away. As the guide spoke, she felt herself drifting. She felt she knew this building so well. It spoke to her and engulfed her. And she froze. The fear ran through her, the terror, the absolute sense of evil. The house was alive, its own being. Something was wrong. She couldn’t breathe, tears welled up in her eyes and streamed down her face. She screamed, petrified. “Sarah!” shouted her teacher. Sarah’s face burned. She hated the feeling of being singled out and the reprimand was too much. She looked at Mrs Clarke with a feeling so intense, she scared herself. A presence emerged inside her; a presence she didn’t recognise. Malevolent. Sarah closed her eyes and pulled herself back. She looked around at the others in the group and took in their sniggering faces. She wished she didn’t care but she did.

The group was led into a small, dark, unwelcoming room. Straight away, she felt it. The evil was intoxicating. Her instinct was to get out but the thought of facing Mrs Clarke’s wrath again prevented her. Sarah stood there, cold, breathless, frozen. She was torn between the present and somewhere else. An omniscient voice called her. A voice over which she had no control. A silent voice, but its power was overwhelming. She knew this voice. She knew this force. It felt part of her. It was part of her. Sarah listened to the story of the woman who had thrown her child out of the window and then hanged herself in this room. That was enough. The words faded as the room spun around her. She could hear the screams, she could feel the evil surrounding her, possessing her. Sarah ran for the door but it was locked from the outside. Surely, someone’s twisted idea of a joke? She felt the tightness around her throat, the life leaving her, her soul somewhere else. The evil, the malevolence. It was in the room. The twisted spirit which pulled at her. She fought and fought; it would not let her go. Its strength, its power. She felt the horror, the torment, a soul reaching out to her. She would not give in…

This memory had stayed with Sarah. This childhood memory which she had never been able to shake off; there was no escape from it. It tormented her dreams. It haunted her soul. Whatever happened in that room had been terrifyingly real? The Hall was somewhere she had vowed never to return to yet something had pulled her back. A feeling, an energy. Something she could not explain. Something unresolved. It was a memory which repeatedly returned to her and, eventually, it drew her back.

Sarah knew she had to face the torment which lay within her soul. Slowly, hesitantly, she made her way up the grand staircase towards the Red Room, the blood red velvet of the ancient carpet crunched underneath her feet. With each step, she felt herself transported to another time, her soul giving in to a supernatural presence. Its power unrelenting. She was losing herself once again. She fought its suffocating, oppressive strength. She could feel its determination to overpower her soul. Her energy was rapidly depleting, submitting to this malevolence. But she would not give in. She wanted to retreat, to run, to escape but she was beyond that.

The room faced her. She entered. Unwillingly. She was engulfed by the musty, ancient smell of the room. The smell of death. The torment, the pain, the suffering. The evil which remained. Unchanged. Dominant.

The mirror called her. She approached it with trepidation. Terror. As she looked into the glass, the emaciated image returned her stare. The evil within her reflected. What was this? She felt the vengeance of an unknown soul, filling her body, usurping her. An ethereal presence determined to return to where she belonged. And suddenly, she smiled at the image in the mirror. She was back. Her power was strong and vengeful. The barrier between the worlds would not stop her. This time she would be released. She put her hand to the marks on her neck. The marks of the rope. The noose which had brought about her death; and she would seek her vengeance.

Sarah fought. This was not her. This malevolent force was not her. She would not give in. This energy; this power. She screamed. Sarah knew what she had to do yet she was weak. The power inside her was strong, yet Sarah had a determination which was stronger. The screams pierced her head, the pain seared through her brain. Ancient memories which were not hers reverberated inside her consciousness. Images of the past blinded her. And suddenly she felt a child’s torment, its fear, its pain, its goodness rising inside her. A child’s lament which brought Sarah screaming to the present. A lament which was more powerful than any malevolence. She opened the drawer and reached for the paper knife. The bluntness of the blade would have to do. Yet Sarah’s power was also strong.

“You know me, Sarah. You have to let me live. You have no choice. If destroy me, you destroy yourself.” The voice reverberated in Sarah’s head. She felt the evil. It was powerful yet the child within her was stronger. The screams seared through her; she had to end it now. This was not her. It was an illusion. A deception. She would fight. She would not allow this malevolence was not going to break free. She felt the child rise within her. The child which gave her strength. And she screamed. Her hand seized the mirror, Blood streamed down her hands as the glass shattered. And there was silence. Peace.

Sarah lifted her face. She was outside, cherishing the coolness of the air, the freshness of the rain. She looked around her and picked herself up. There was a new strength inside her. And somewhere, an innocent soul had been set free. As she walked, the shadow of the Hall loomed behind her. She did not look back.